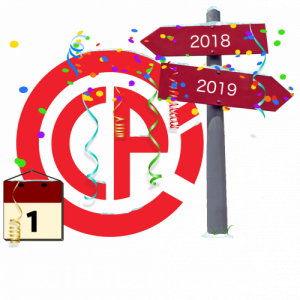 2018 is very nearly over & 2019 is just around the corner, so it’s time for us to take a moment to reflect on the highlights of the year.

We’ve had another great year of growth, investment & partnerships to keep up with the ever-growing demands of the heat treatment industry.

To kick off 2018, our very first day back after the new year saw James Saxelby join our UK sales team as a Key Account Coordinator.

In less than a year, James has become an integral member of the sales team & is now also assisting in the scheduling & management of the service department.

February saw the UK get battered by an abnormal arctic outbreak, pushing sub-zero air from Siberia down into Europe & combining with storm Emma.

The result was dubbed ‘The Beast from the East” by the media.

Some areas saw over 50cm of snowfall in less than 24 hours. This therefore caused the MET office to issue their first-ever red warning for snow.

Once the snow had melted & the ground had thawed out, we had Sam Greaves join the IT Department as the Software Development Apprentice, assisting the department in the day-to-day running of the IT & software services.

In April, Lennie Flavell was promoted to Deputy Head of IT. Massive congratulations to Lennie on his hard work over these past seven years!

This new, state-of-the-art technology operates by employing the same principles as used in thermal calibration laboratories for the highest level of calibration, i.e. the fixed-point method of calibration.

In May, we also saw numerous members of staff complete their training & qualifications. With far too many names to mention we’ll just say congratulations to;

Heads of Departments for completing Level 3 Diploma in Management.

And finally, everyone who completed the NVQ Diploma in Business Improvement Techniques.

By the time the UK finally saw some nice warm weather, it was June & time for the European Sales Meeting.

Our Area Managers from France, Spain, Germany, UK/Ireland & representatives from the CCPI Europe Amsterdam Sales Office all congregated at the Sheffield Headquarters to discuss the first half of the year, upcoming projects & plans for the remainder of the year.

If you missed the webinar, you can catch it below!

The IT, Laboratory & Technical team took a trip over to ISOMIL GMBH in mid-August to install their custom-built calibration system as part of our investment in our external stakeholders.

The unique system designed by the team at CCPI Europe will enable calibrations to be conducted to low uncertainty levels required by the aerospace and aerospace heat treatment industries.

In September CCPI Europe signed the data license agreement with C3 Data for the exclusive European distribution rights for their furnace compliance software. The partnership with C3 Data will allow CCPI Europe customers to streamline their processes for Nadcap, AMS-2750 & CQI-9.

The Laboratory, Quality & Service departments underwent a major 4-year cycle reassessment by the UKAS audit team in early October. The audit was a success with the auditors awarding maintenance of the accreditation. This means that it’s the 20th year the Laboratory has secured the accreditation.

We also had Fran Rose join the Sales Team on her Business Administration Apprenticeship. Fran has settled in well & is assisting the Sales Team in the day to day running of the business allowing them to focus on customers.

To keep up with demand in our UKAS accredited Laboratory (0600), Karl started in mid-November as a Senior Laboratory Technician. Welcome to the Laboratory Team Karl!

The 12th December was our 10 year anniversary since we called the Temperature Technology Centre our new home. The custom built 30,000 square foot was officially opened by HIS ROYAL HIGHNESS – The DUKE of KENT KG.

Friday 14th we celebrated Christmas Jumper Day again this year. We all dug out our woollen wonders from the back of the wardrobe.

Save The Children charity help children around the world living in the toughest conditions & help them build a brighter future & we’re proud to be involved.

Here’s some of the best (or worst) examples from Christmas Jumper Day 2018 below!

And last but not least…

Trevor Ford retired from the role of Technical Director just before Christmas after 21 years of working for CCPI Europe.

When Trevor started as a Laboratory Technician, CCPI Europe was a £900K enterprise & with only 17 employees. How times have changed!

Since those days, Trevor has progressed up through the Laboratory into his Director role which overlooked the Laboratory, IT & Service Departments.

Trevor will be spending his retirement with his family & friends, travelling the world & hopefully working on his awful golf swing. Everyone at CCPI Europe would like to wish him the best in his retirement!

And that’s 2018 all wrapped up, nothing left but to wish everyone a very Merry Christmas & Happy New Year!